When my brother died, he was a broken man. It’s been 7, nearly 8 months since he was found dead, lying on the kitchen floor. He was alone, although his girlfriend was upstairs sleeping. Toxicology came back three months later and showed that he died of a lethal quantity of fentanyl and cocaine.

I was surprised by the cocaine. I figured it would be oxycontin that killed him.

I assumed it was pain medicine that had triggered the overdose because he was always in pain. So much pain.

The suicide attempts are too plentiful to count. They blur in my memory and become a constant state of worry about when he would finally succeed in ending his own life and release him from the suffering. In his meager belongings I found so many suicide notes and they all said the same thing, “I am sorry, I can’t take it anymore, I have to do this. I love you.”

It hurts to imagine the torture he must have felt. I understand the drive toward numbing that pain. I have felt it too and I don’t know what it is about me that has kept me from slipping into the brokenness that controlled his life. Maybe it’s genetic. Maybe it’s the slight differences in our upbringing. I don’t know. I wish I could have given him some of what I have. I really do.

I knew a lot of his heart and what drove him and I know that having become such a disappointment to the people he loved most was more than he could bear.

I can pinpoint the moment when each of us gave up on him.

It’s hard to write the words but it’s true.

Each of us gave up on him, some of us sooner than we should have, in my opinion, and I think that added to his brokenness. But everyone is on their own journey and it’s not my place to judge others.

Except for my Aunt. She never gave up on him and she supported him emotionally and financially until the end. Some people might call it enabling and that would be fair. She didn’t give him a lot of money. She wasn’t supporting his habit. But she never stopped offering her time, her energy, or her love. I am grateful that she was able to do that for him. I am grateful that someone was able to continue offering that love that he craved so much, right until the end of his life. She did it without expecting anything in return.

I withdrew my love slowly, over the years. I finally stepped away entirely from him about 14 months before he died. I didn’t speak to him once for 14 months. Our last conversation was on Christmas Day, 2016. I did not tell him that I loved him for 14 months. I did not offer him support or unconditional love. I walked away and I rarely felt much about it besides relief. That’s truth.

I judged him and became frustrated and overwhelmed and tired of the toxicity that went along with loving him. Perhaps I made it worse by how much I let it affect me.

My brother was a very difficult person to love. That’s also truth.

The more you loved him, the harder he was to love.

He stole from me, many, many times.

He called me names, told me I was selfish and cruel, he screamed and yelled and accused.

He was a bottomless pit of needs that I could not meet.

That’s truth. The other blog I wrote about him was also truth. All the good things were also true.

But this blog is about releasing the other side of the truth and the complexity of loving a broken man, like my brother.

There are things that aren’t fit for public blogging that I know he did, ways he hurt people. There is no tangible proof that it’s true but I know it in my heart. I know he did the things he is accused of because I know him. I knew him. Deeply.

Here is the saddest part of brokenness, it spreads.

It’s very rare that a truly broken person is born; the sociopath.

Broken people are made. We create them.

The world broke my brother. Our parents broke him and then the circumstances of his early life, much of which was beyond his control, continued to break him.

I am not sure at what point we stop being responsible for them.

I am not sure when it stopped being my responsibility to help heal my broken brother.

It started when my mother died, the letting go of that responsibility.

And over the last several years, as I have fought for my own emotional health and well-being, I have become less and less capable of supporting my brother.

As I have done the work to heal my own damaged soul, I became intolerant of the brokenness in my brother and it’s impact on me.

In order to be healthy,  I had to let go of being my brother’s go to person.

I know this. I am certain I did what I had to do.

I feel saddened that I couldn’t find a way to disconnect from the affect he had on me enough to love him the way my Aunt did. I really wish I could have figured out a way to love him, to support him emotionally, to love him unconditionally, without allowing him to hurt me.

I wonder if that’s what happens to all broken people, if they reach a point in their lives where they truly are abandoned and left to suffer alone?

I didn’t expect to never to speak to him again. I figured we had time and that we would figure it out. He was very important to me and we had a deep connection that only people who share trauma can really understand. I assumed I would give it some time and we would reconnect. I had been thinking about it a lot the months before he died and I had been asking myself if I was ready to reach out to him.

It is too late now and I will never have that opportunity again.

And grieving him, grieving the loss of him now is difficult to describe.

It’s filled with so many layers and there are days when I get stuck in one layer and I find myself aching or angry or embarrassed and unable to remember the truth of my own right to walk away from him in order to heal myself.

Whenever I am struggling with something, music becomes a way of explaining what I feel inside. Right now there is song I am playing on repeat that captures what it means to love a man like my brother, to love someone who is broken.

“It was hard to hide that his heart had scars
He would stay up late talking to the stars
People tried to blame him for making bad choices
When he was only listening to the voices
And searching for some kind of deeper truth
Between the lines and the Bible and living proof
There’s no point now to judge him in vain
If you haven’t been there, you don’t know the pain.”

My aunt posted a photo of my brother today on her facebook. I cropped her out of it (because it’s her memory and not mine to share) and it left just 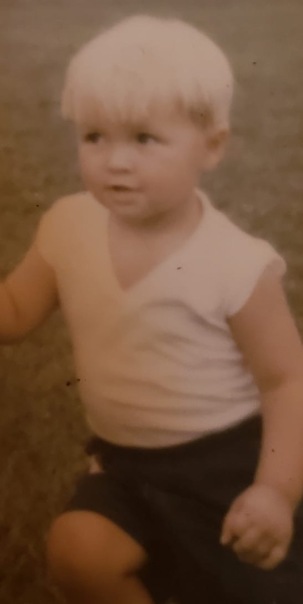 my brother’s sweet toddler face. I like to imagine him when he was innocent, before the world broke him and before he began breaking others. I imagine the hope in him and the love and the sweetness and the purity. I imagine all the wonderful things about him and it helps me process this other half of him, it helps me love him (and I do and I always did and I never stopped) and to offer that love with pride instead of shame. I suspect that is the most difficult part of this grief journey I am on, loving someone who may have stopped being worthy of that love. Not “worthy” in the sense of his own worth as a human being and right to exist, but worthy in the sense that at some point, human beings must become responsible for themselves and it was NOT my responsibility to carry him anymore (or maybe ever but that’s another blog for another time). It’s easy to know something intellectually and much more difficult to accept it in your heart. I know one thing for sure, I wish I could have helped him heal. I wish I could taken away his pain so he could have had a more fulfilling life. I know he loved me so very much, and I will always cherish the words that I found in a small travel journal “Renee, I loved you more than I have ever loved anything.” I know he did, and I can’t help wondering if it was his immense love for me growing up that allowed me to exit our shared trauma childhood less injured than he was.

Most of all, I wish I could look into his eyes one last time, touch his face, connect with him, and let him know how much I loved him, no matter what.