My life fell apart three years ago. Pretty much exactly three years ago. Like today may be (I can’t remember exactly) the exact anniversary of the day I went to the store and paid good money to purchase the dynamite that I would then use to bomb the fuck out of my somewhat decent life.

Analogy being used here. I didn’t actually use dynamite.

But three years ago today or sometime this week, I made choices that would change the trajectory of my life forever. It would cause ginormous pain for my children, my former spouse, and for me.

I am not quite certain how I survived it. There were days when I didn’t think I would, the depth of my sadness was so great a burden I literally could not carry it.

There is still some brokenness that hasn’t healed, still some pieces of myself I haven’t recovered. That’s just the way it is.

Some days I feel angry.

At the risk of turning into a cliché, the cool part of a completely shattered, messed up, insanely ugly, horrible life experience is the absolute depth that I feel every single moment of happiness.

GOD I feel it.

Deep down inside. It’s like a wave that goes all the way through my body and ignites all of my cells on fire.

When it happens the hairs on my arms stand up. And I get little tears in my eyes. And I feel so very grateful for that moment in time. And it’s good. It’s so fucking good.

Last week, I was sitting on the porch with my girlfriend.  I was sharing some pieces of me that I don’t often share, then she returned the favor…my tough girl opened up. And then we just sat there and we held hands. And we looked at the blue sky. It was lovely. And safe. And peaceful. And that happiness was so real. it was practically something I could touch. The feeling of happiness became a living breathing organism.

I took my kids to Fiesta Texas for my son’s birthday. It was hotter than hades. I wanted to lay down and hide in a corner from the crowds instead of riding rides and walking through the pea soup like heat. And then all the groups of teens and pre-teens came together, my little band of me and the seven kids I had brought with me to the park managed to meet up at our scheduled time. Someone suggested the “lame roller coaster”, the only one my youngest child will ride. So we ran full speed to the line. While we waited we laughed and took “selfies” and fought over who was sitting with who and in what order. And I felt it again, the living, breathing organism of complete and utter peaceful, beautiful happiness. It washed over me again. And my brain took a photo of the feeling to store for future viewing.

Then running in the park with one of my favorite people in the world last Sunday. My legs were moving and my knees didn’t hurt too much (God I am getting old). My lovely running partner and I had so much to talk about that we went almost 5 miles on a ridiculously hot morning and never skipped a beat in the conversation. As I drove away she called me because there was just one more thing she wanted to tell me and I felt it again, the simple joy of peaceful happy “yes to this moment” feeling.

And then this morning, It happened again. I woke up my kids and everyone was in a good mood. We only left the house five minutes late which is a record in the summer. This summer has been filled with anxiety…me working full time and their dad having a girlfriend at home who the boys could stay with. I have struggled with my fear that they wouldn’t want to be with me because I make them get up and go to camp instead of sleeping and spending the day playing video games and swimming in the pool like they can at dad’s. We all got up and left the house. And my middle child, the one that has nearly killed me with his anger over the past three years, got out of the car and turned to me and smiled. I was saying something goofy that I say a lot this summer, “make sure you do some learnin’ today, don’t want your brain to rot out before 10th grade” and giggling. And he laughed and promised he would and then said “I love you, Mom”. It’s all still messy and he is still angry, but that “I love you” was heartfelt and sweet and light and beautiful. And the happiness washed over me again and the hair on my arms stood up, and the wetness hit my eyes and I was feeling it, all of it, all the way to my core.

So here it is. The blessing in the craptastic three years of struggle.

I feel it so much more now than I did before.

I can’t quite say it was worth it.

For moments of joy, bliss, peace.

I just don’t know if I could feel these moments like this, if I could really appreciate them, if I hadn’t had my life fall apart. 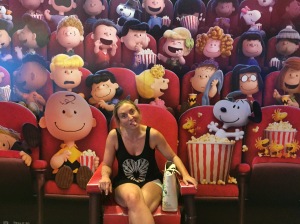